Just as a lotus flowers blossoms in muddy waters, similarly, a skilled yogi
blossoms by fully functioning in the world but remaining unaffected by the events. 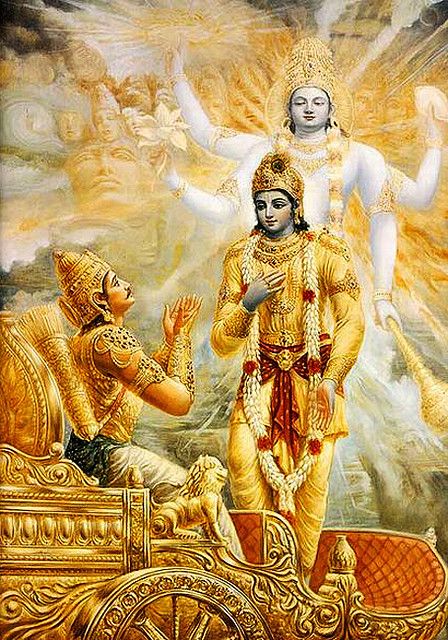 Arjuna was all prepared and was looking forward to the biggest and most difficult war of his lifetime. It was a war against non-righteousness but it was also a war against many of his relatives, teachers, and friends who were on the side of non-righteousness.
At the last minute, just when the war was about to begin, Arjuna became highly emotional, conflicted, and deluded. He didn’t want to fight anymore and was ready to surrender. It was then that Lord Krishna, for the benefit of Arjuna and the entire mankind, instructed the Divine science of Yoga to him. Listening to which, Arjuna regained his strength, and fought and won the war. Since then, that Divine Knowledge, Bhagavad Gita, has been guiding and inspiring millions around the world to live a life that is righteous. meaningful, and balanced.

The Supreme Lord said to Arjuna, “I instructed this imperishable knowledge of yoga to the Sun-god Vivasvân, who told it to the father of mankind Vaivasvata Manu, who in turn instructed it to Ikshvâku.”

Lord Krishna was the 8th incarnation of Lord Vishnu, who is also known as Lord Narayana and Govinda.

Very long ago, so long ago that it’s even difficult to comprehend, the Sun-god, desirous of hearing the wisdom of Yoga directly from Lord Narayana did severe penance and austerities. Lord Narayana, being pleased with the Sun-god agreed to speak on Yoga and instructed him to invite gods of other planets and a few other highly evolved holy-beings including a revered rishi, Shri Purnananda, along with his two young children, Anidra and his younger sister Sadhavi.

The discourse was a dialogue between Lord Narayana and the Sun-god, which lasted for three days. Anidra and Sadhavi, who at such young ages had obtained complete mastery over their bodies and minds, sat there motionless, even during the nights. They were completely immersed in Lord Narayana.  Their faces reflected the innocence of the Truth, alertness of the present, and flawless beauty.

After the discourse, Lord Narayana asked Anidra and Sadhavi to come and sit beside Him. He praised them saying that they both had understood Yoga in its entirety and that they were worthy of receiving blessings from all gods and other holy-beings present there. Hearing that, all present there cheered with joy and showered their precious blessings upon them. But just as any more water added to a cup, that is already full, spills over, all blessings showered upon them spilled over as they both were filled with Govinda. In their hearts, they humbly declined all blessings. Then Lord Narayana Himself, the knower of all, being even more pleased, hugged them and said to them,” Nothing can ever separate you from me.”

Once, King Abhaya asked Sage Anidra, ” O Holy Master! kindly enlighten me on the different paths of yoga and which path is the greatest of all for knowing Govinda?”
Sage Anidra answered,” Abhaya, why do you want to know the different paths of yoga? What would you do with that knowledge? You have already accumulated so much in your mind.  Any more knowledge, however beautiful and valuable it may be, will only add to the confusion and questions in your mind.
Just as overeating makes the body unwell, similarly, over-accumulating the knowledge diminishes the mind’s ability to comprehend. And just as when wet wood is burnt, it produces smoke instead of fire, similarly, uncomprehended knowledge gives rise to confusion instead of wisdom.

Abhaya, drop the desire to know more. This desire is the same as the desire of a greedy. man who always wants more.  Having more is not the way to know Govinda. Instead, losing is. First, lose all that you have accumulated in your mind. You can know Govinda only by losing, never by gaining.”

Saying that Anidra became silent. All his life, the king had desired and fought to gain more, but today he wanted to know how to lose? He wanted to ask Anidra, but sensing that Anidra didn’t want to speak more, he remained silent.

Thinking of Govinda, Anidra played a song on his flute which meant:

O my mind! Knowing that
His remembrance alone
gives rest to you.
why do you forget Him?

Without Govinda
all else is nothing
but just flying-dust
in a windy storm.